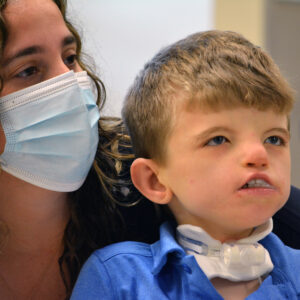 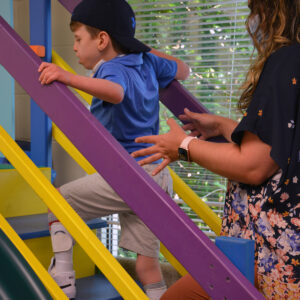 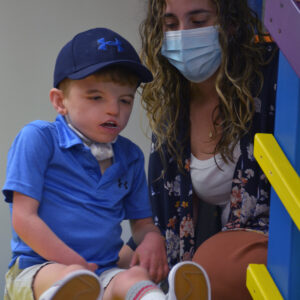 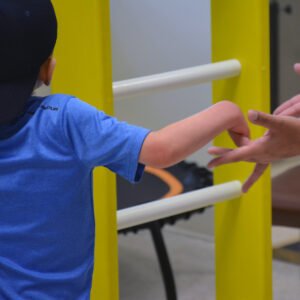 In 2019, ten-year-old Ryder was featured in our annual report. We featured him for his progress with physical, occupational and speech therapy sessions as they helped him make strides toward independence.

Ryder was born at 38 weeks. Doctors suspected that there would be some difficulties, but did not diagnose Fraser syndrome until several years later. Everyday life for Ryder and his family has always included ventilators, oxygen tanks and breathing machines; a nurse helps care for Ryder during the day. Ryder was intubated at birth and in 2019, he was just beginning to experience the freedom of being off his vent. “We were told that he would never come off the vent during his life, but he has done that,” said dad Dustin.

In 2019, some of Ryder’s therapy goals included learning to use his left hand to grab things; standing independently; taking supported steps using his gait trainer; communicating his needs with devices; and pulling himself up. “I would love to see Ryder walking independently within the next five years. I would love to be able to see him crawl into the car and car seat without us having to physically lift him. Those would be amazing milestones if we could hit those,” said mom Katy in 2019.

Ryder has made some significant progress in the past two years – he is using his left hand for grasping with a much stronger grip; he is able to stand for longer periods of time by himself; he received his own gait trainer in 2020 and has quickly adapted to taking steps and walking for measurable distances; he is benefiting from the consistency of therapy in learning to communicate his needs; and he is mastering the ability to pull himself up to stand and climb stairs.

This past year was a tough one for Ryder and his family. In January 2020, Ryder became very sick and was in the hospital for six weeks. It was a very scary time for the family as Ryder had pneumonia and a fungal infection in his lungs (aspergillus). A chest tube was used to drain fluid out of his plural cavity in his left lung, but soon after that was healed, he developed a very large abscess in the left lung that was about half the size of his lung. Another chest tube was used to drain that fluid.

There were talks about having surgery to remove part of his lung, but luckily Ryder came home from the hospital with the second chest tube around the time COVID outbreaks peaked. Ryder had to take a six- month break from therapy sessions to heal and he did lose some strength during that time. Much of that strength has now been regained through hard work during therapy sessions.

“Therapists at Easterseals Crossroads know Ryder really well; they know how stubborn he can get and they don’t necessarily take it easy on him during those times. Seeing how much he has progressed in the last two years has made us really excited for the next two years. We would really love to see him stand independently for long periods of time and we would love to see him take some steps without the need of his gait trainer,” said Katy.

“We just keep going. We put Ryder out there and live each day to the fullest. We’re not held back by disability,” said Katy.